Asha was rescued by West Bengal police after being mistreated outside their training facility Credit: AFP

Some 18 months after being rescued from stone-throwing children, a street-dwelling mongrel has emerged as India’s top dog in the country’s elite bomb- and drug-sniffing squad.

“Asha” – meaning “hope” in Hindi – was rescued by West Bengal police when they found her being mistreated outside their training facility.

“The dog was bleeding when she was taken inside the campus,” senior West Bengal Police Training Academy official Dipankar Bhattacharya told AFP.

Officers originally intended keeping the mixed-breed stray as a pet, but Asha turned out to have a nose every bit as good as the German Shepherds and Labradors usually trained to sniff out explosives and drugs.

Sajal Mondal, the head of the academy, said she passed the gruelling training with flying colours and that drugs and explosives like TNT were no match for Asha’s keen sense of smell.

“She is also our fastest runner.”

Asha is the first ever mixed-breed dog to join the 30-strong unit.

UPDATE ON HORSES BEING TORTURED BY THE HAVASUPAI TRIBE MONSTERS

Original Post: MONSTERS OF THE HAVASUPAI TRIBE I told you about these horses over a year ago and tonight I’m driving and on the radio is Susan Ash of @HavasupaiHorses talking about the horrors still going on there. I naively thought my exposing them that tourists would choose a different destination for their vacation, not so! […]

via: UPDATE ON HORSES BEING TORTURED BY THE HAVASUPAI TRIBE MONSTERS — The Monsters Among Us

Posted on September 28, 2017 by Mountain★Republic 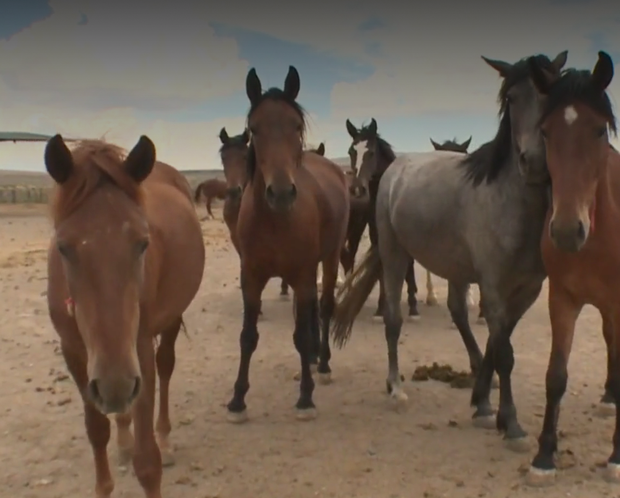 The fate of thousands of wild horses hangs in the balance as the Senate considers an amendment to a spending bill that would allow euthanasia of mustangs and burros roaming free on land owned by the federal government.

The amendment would allow the Interior Department’s Bureau of Land Management (BLM) to sell excess wild horses without an assurance they wouldn’t be slaughtered. The matter will eventually be settled in negotiations between the Senate and the House.

CBS San Francisco traveled to the Utah desert, 50 miles northwest of Cedar City, to witness a federally mandated round-up of an icon of the American West.

Using a helicopter that looks like it was stolen from the set of M*A*S*H, federal agents began the process of gathering 50 wild horses.

“When you have horses that close, when they come into a trap site, they’re very fresh, they have a lot of energy. When you’re gathering wild horses, they are wild animals,” said Gus Ward, the BLM’s Wild Horse and Burro lead for Utah.

The roundup is the result of a lawsuit settled by the state of Utah over horses encroaching on ranch land. With repeated helicopter passes, stallions, mares and foals are driven out of hills and corralled into a trap to be sorted.

From there, they’ll be taken to a holding facility and hopefully adopted.

Pet overpopulation is the most serious humane issue facing pet animals in our society. Thousands of pets die in Los Angeles every year as a result of overpopulation.

Pet overpopulation is the most serious humane issue facing pet animals in our society. Thousands of pets die in Los Angeles every year as a result of overpopulation. Their remains are collected throughout the city (from shelters, veterinarian offices and even from the streets) and then taken to rendering facilities to be processed into raw materials […]

via: Pet overpopulation is the most serious humane issue facing pet animals in our society. Thousands of pets die in Los Angeles every year as a result of overpopulation. — My Blog Straydogsworldwide

Posted on September 22, 2017 by Mountain★Republic

Local and national animal protection organizations commended California lawmakers for passing legislation that will prevent the sale of commercially raised dogs, cats and rabbits in pet stores across the state of California. The law also encourages partnerships that promote the adoption of homeless pets.

Authored by Assemblymember Patrick O’Donnell (D-Long Beach), Assembly Bill 485 protects animals and consumers, and sets an important precedent for the rest of nation. To date, 36 jurisdictions in California – including the cities of Los Angeles, Sacramento, San Diego and San Francisco – have enacted similar ordinances, and the passage of AB 485 moves California one step closer to enacting the first statewide prohibition on pet store sales of dogs from puppy mills.

TAKE AWAY THE CURSE PLACED ON PIT BULLS! Change.org

URSE PLACED ON PIT BULLS! https://www.change.org/p/president-donald-trump-take-away-the-curse-placed-on-pitbulls ONE EXAMPLE: I just pledged for him 200 € – but the costs for surgery – critical! But I fight for him and many others. But slowly, slowly, the costs are much higher as I could […]

via: TAKE AWAY THE CURSE PLACED ON PIT BULLS! Change.org — spiritandanimal.wordpress.com

A Superhero for Street Cats

There are many caring animal lovers who work hard to help the homeless cats in their communities, but one little boy in Philadelphia is a true superhero for cats! A recent article in The Dodo brought a smile to a lot of people’s faces around the world when it went viral on social media. A […]

via: A Superhero for Street Cats — FACE Foundation

More than 350 animals found in ‘inches of feces’ in Georgia

More than 350 animals are now safe after they were found living in “inches of feces” and without access to clean water in Habersham County.

The animals — including a horse, dogs and puppies, cats, donkeys, pigs, chickens and ducks — were in need of urgent veterinary care, according to The Humane Society of the United States.

Habersham County Animal Care and Control officials received a barking complaint and did a wellness check before they served a search and seizure warrant about 5 p.m. Wednesday.

That’s when they found the animals in cages lined with torn and dirtied newspapers.

Some of the them had matted fur, skin issues and rotting teeth, according to the Humane Society. Officials have not specified where in Habersham County the animals were found.

Source: More than 350 animals found in ‘inches of feces’ in Georgia

There is something about street dogs, about rescues; they have this knowing sense about them.

How to Defend Yourself Against a Pit Bull Owner Attack


10 Reasons Pit Bulls Are The Best


Try Not To Cry: Dogs Meet Their Owner After Long Time II


The Cliff Diving Dog of Malta

Mountain Re-Home is a project of
Mountain Republic